It is effective to plan the overall body trajectory in advance when doing tasks with a certain degree of complexity. As mentioned in Control of humanoids section, motion is ruled by both the equation of motion and the constraints on the reacting external forces.

When representing the robot motion by COM-ZMP model, the problem is to find a COM trajectory which connects the initial and the goal positions and also a ZMP trajectory which passes the supporting region simultaneously (Kurematsu et al. 1988, Kajita et al. 1991, Kuradume et al. 2003, Nagasaka et al. 2004, Harada et al. 2005). It is impossible to adjust one without affecting the other. Conventional methods either assumed a slow motion to neglect the effect or planned a batch of steps in order to make it consistent.

In this study, the boundary condition relaxation method was proposed to plan a stepwise motion instantaneously though it sacrifices the exactitude of the goal condition. It succeeded to plan several responsive motions including a sudden motion initiation, stop and turning in online.

An advantage of using humanoid robots is that even a non-professional user can intuitively associate tasks with motions to be performed by the robot. On the other hand, many constraints are posed on motions. In addition to the dynamical constraint, which has been already explained in motion computation, the geometric constraint is also serious in order to guarantee collision-free but steadly-contacting postures. The goal of this study is to provide a software tool with which users enjoy designing robot motions without being frustrated by such a bother.

Key-frame animation, in which motions are represented by interpolating some representative postures, is used in the field of computer graphics. It is preferable to a motion capturing system, on which users have to perform the same motion with one to be performed by the robot, and a human-figure posing device, which is not good for puppeteering dynamic motions. The representative postures edited based on the robust inverse kinematics solver work as seeds of motion. They should effectively define only important points for the motion and leave degree-of-freedom to modify the motion and satisfy the constraints.

Three problems to be considered in terms of geometry are

Issues around the dynamical constraint can be tackled basically based on the same approach with the above boundary condition relaxation. But, the problem becomes more complex in the case of the whole-body movement rather than a simple walk. In particular, a human-like stretchy motion are hard for robots to perform since it often falls into the problem of singularity. Though the robust prioritized inverse kinematics greatly helps to resolve kinematic issues, not only one-shot posture but also a sequence of postures should be carefully designed under the constraint on velocity and acceleration.

In this study, a method to automatically add and delete postural constraints with the dynamical constraint taken into account without breaking an essential part of the motion. The motion in the above left animation is designed by the conventional method, which keeps the inverse kinematics to be solvable during the motion. The other in the above right animation is designed by the proposed method, where a natural heel-strike and toe-off is emerged neither by a detailed trajectory design nor by an exception process.

When planning a robot motion in our complex life environments, the whole motors should be skillful coordinated in order to avoid obstacles and reach the goal. Both a complicated geometric constraints due to the shapes of robot body and obstacles and the dynamical constraints on the external forces has to be simultaneously taken into account. It is one of the most challening problems in robot motion planning. 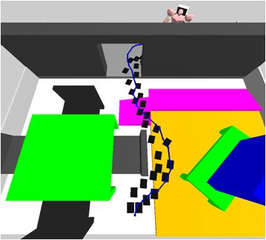 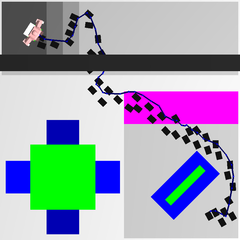 For a large scale path finding, some stochastic approaches such as PRM (Probabilistic Roadmap Method, Kavraki et al. 1996) and RRT (Rapidly-explored Random Tree, Kuffner&LaValle 2000) have been proposed as efficient solutions. They have been applied to humanoid robots in several previous studies (Kuffner et al. 2000, Yoshida et al. 2005, Hauser et al. 2005, Harada et al. 2007). The 'raw' paths resulted by those stochastic methods, however, are jaggy and not used as is, so that they have to be processed into smooth ones in practice.

In this study, a technique of spatiotemporal filtering was proposed to process both transitions of the supporting configurations and a continuous trajectory which interpolates them.

Though the above stochastic method works rather in non-uniform and dense environments, it still has a large computation cost. It is preferable to use a simple gait planner in sparse environments. The problem is how to evaluate sparsity and density of the environment and to use methods depending on it.

This study provides an efficient adaptive complexity method as follows. The robot body is approximated by a simple but volume-variable box to find a candidate of the path. A partial path which large boxes bounding the robot body are concatenated highlights such a sparse space that the simple gait planner works. The remaining portion which smaller boxes than the robot body indicates that the space is dense but the robot might be able to go under, through or over by changing its posture, and the stochastic method possibly works. Based on the idea, the path is replanned segmentwise with the minimum computation cost.

In several case studies supposing a quite complex environment as the above, the method succeeded to find the path in a realistic time.

Steering of a robot from a small number of inputs

A possible advantage of the use of humanoid robots is that they can be remotely operated with a highly live aspect by exploiting similar morphology to humans. Operators can use robots as an augmentation of their own bodies. However, it is not easy to manipulate a robot which is different from the operator in terms of size, weight and sensing capability.

Generally considering, the manipulation device also has to have as many input variables as motors in order to move the robot to various actions, while it is hard to manipulate so many inputs simultaneously.

The goal of this study is to develop a robot navigation system which is easy to handle but capable of outputting a variety of motion. A realtime motion synthesizing method was proposed where the body part which is directly navigated by a commercially available game controller (5-6 inputs) was switched during operations without interruption. 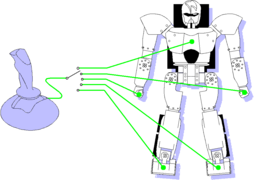 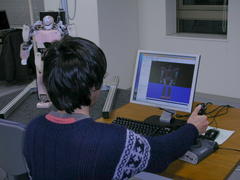 It is not as simple as it seems to navigate a humanoid robot to the goal or direction commanded off-hand by the operatore. The trunk motion and feet motions are easily in conflict with each other. A careless navigation causes collisions, crossings, tangling and over-stride of the feet.

In this study, a self-consistent navigation method for humanoids was proposed. It guarantees that the relative locations of each foot to the other are always consistent by guiding the robot to the goal along a virtual rail.