One should notice that the external force satisfies the following constraints.

The former is more severe, which is substitutable with a condition where the center of pressure of the external force must lie within the supporting region (the convex hull of contact points) (Vukobratovic et al. 1969). The center of pressure is also defined as the zero-moment point or ZMP in short, since the horizontal component of the moment of force (torque) acting about that point is zero (Vukobratovic et al. 1972). 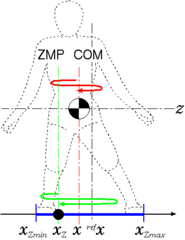 The relationship between COM and the total external force is also represented by that between COM and ZMP under the following approximations: (1) the total mass is concentrated at COM, and (2) the height of COM is constant. In such situations, the manipulation of ZMP is almost equivalent with the manipulation of the external force (Mitobe et al. 1996). It originates in a fact that the dynamics of COM-ZMP is similar to that of an inverted pendulum (Nagasaka et al. 1999). The question is in what way ZMP should be manipulated.

Humanoid control involves a variety of objectives such as keeping stance configuration, stepping out to avoid falling down, alternating the pivot foot and walking. Controller should be designed to achieve each objective based on the common equation of motion of the COM-ZMP model and dynamical contraints. However, it is not desirable to switch many different controllers which are individually designed for each objective according to the situations due to the following two reasons. First, the borderlines between "the situations" are not so clear that they are easily classified; if the controllers are designed based on the assumption that situations are well-defined, they don't properly work against the changes of realistic situations. Second, it is hard to design the behavior in the upper layer upon a patchwork of individual controllers. 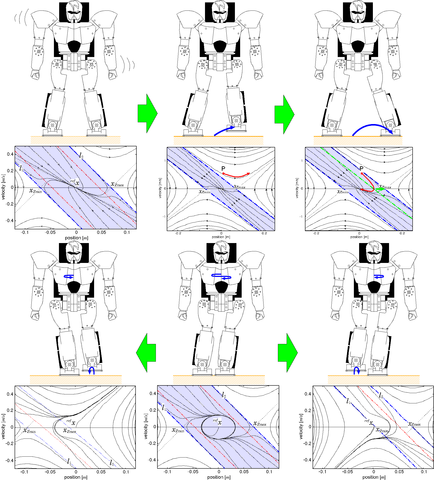 A benefit of COM-ZMP model is that the system behavior is easily visualized including the constraint where ZMP lies within the supporting region. In this study, a seamlessly morphing controller which starts from the standing to self-excited oscillation, the pivot foot alternation and the stepping-out was designed based on the behavior of COM visualized on a phase portrait. The voluntary morphing of the system by the controller is synchronized to the passive morphing of the system by the deformation of the supporting region. We named this framework the dynamics morphing.

* This is a co-work with Dr. Seto in Future Robotics Laboratory of Chiba institute of technology (at that point).

Although the reaching motion is one of the most fundamental human motions, the control mechanism of this easiest task has not been unclarified, yet. 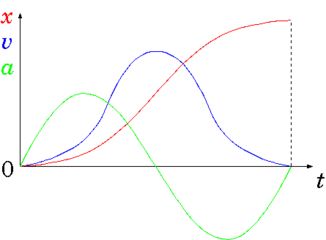 It is known that the velocity profile of the reaching trajectory forms a symmetric bell-shaped curve and the acceleration profile does a sinusoidal curve (Abend et al. 1982). The controller design with such a property is not easy, so that most of the conventional studies have rather focused on the trajectory design as a function of time (Flash&Hogan 1985, Uno et al. 1989, Tsuji et al. 2002, etc.). Even a few works have some problems that they are sensitive to disturbances (Hoff&Arbib 1992) or they do not take disturbances into consideration (Sekimoto et al. 2006).

In this study, an artificial nonlinear potential field is generated from the goal point. The field is deformed slowly with respect to the degree of achievement to the goal, and rapidly with respect to the degree of deviation due to disturbances from the goal. It realized a human-like smooth reaching motion in which the arm complies to perturbations and goes back to the smooth motion when the perturbation is gotten rid of.