Discussions on robot motor control found mathematical properties that the controller should have in order to articulate purposeful behaviors of an anthropomorphic machine. If the discussion is right, the same properties can be seen in a human's motor control. A motor controller developed for robots possibly works as a model of human motor controller. We are taking notice that out controller only focuses on the macroscopic behavior of COM-ZMP. It is rather favorable to find a distinctive skill of a human in differences of the human's behavior yielded not by motors and gears but by many muscles from the robot's. Whichever sense, a method to identify a human motor controller based on a robot controller seems effective. 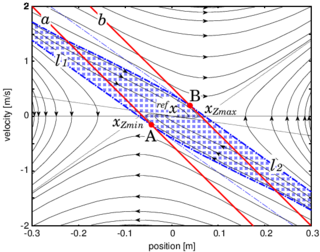 Given the equation of motion, the controller and the initial value (posture and velocity at a moment), the time evolution of the system is uniquely determined. One can draw the above phase portrait from a collection of loci with respect to various initial values. The identification of a controller is achieved by collecting many loci and inversely finding parameters of equations which fit to the loci.

It is important to collect as various loci as possible in order to increase the reliability of the identified parameters. However, it is not easy since humans unconsciously stabilize themselves, so that one can only observe loci near the stand-still posture in general situations. We need an idea.

Fortunately, we can predict loci in each area of the phase portrait based on the model equation. Then, we add preparatory motion to each trial with an assistance of a holding platform in order to reach the target area. Partial loci of the preparatory motion are omitted. 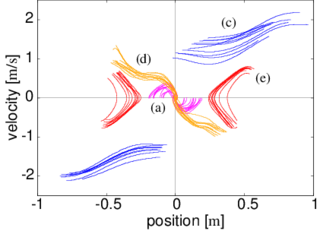 The above is an example of acquired loci, which is qualitatively similar to the theoretic phase portrait. When moving on to the parameter identification, we encounter another difficulty. As explained in robot motor control, the manipulated variable must be determined so as to satisfy the dynamical constraint; if the predetermined manipulated variable violates the constraint, it should be substituted for a consistent one. This means that the controller is defined 'piecewise'. The same thing happens in the case of a human. To segment each region of the piecewise system and to identify system parameters are chicken-and-egg problem. 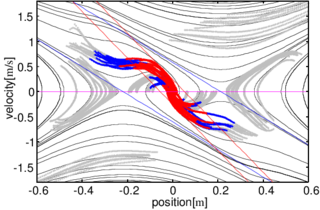 The above is the theoretic phase portrait based on the identified controller superposed on the collected loci. Red portions of the loci are judged that they are likely to be within a region. Two red lines, which are defined from the identified parameters, segment the whole state space into three regions. They are consistent.

The result of the identification has shown that the total structure of the dynamical system is similar to and the details are different from the model.

* This work was supported by Grant-in-Aid for Young Scientists (A) #22680018, Japan Society for the Promotion of Science.