Backdrivability, namely, a property that an external force and the motor actuation force directly interact with each other, is crucial for robots that frequently collide and contact with the external world during performing tasks including humanoid robots. This study provides this property using a very cheap torque sensor.

* This work was supported by 2012 Research Grant (A) promoted by Tateisi Science and Technology Foundation.

A backdrivable joint in turn suffers from the effect of gravity and the variation of payload. In order to utilize the controller which is designed based on the macroscopic dynamics, it is important to control motors accurately as inversely computed by the mesoscopic dynamics.

The robust compensation is achieved by using some integral compensators (Onishi 1987, Kaneko et al. 1991). It is also known, however, that the integral compensator causes an accumulation of the error due to the output saturation and even instability. This is a classic problem and many solutions have been proposed (Horowitz 1980, Hanus et al. 1987, Doyle et al. 1987, Edwards et al. 1998), while they require large sensors to monitor the output saturation. It should be avoided to mount many large sensors on humanoid robots.

In this study, a stable integral compensator which automatically resets the internal value when the output is bounded was proposed and embedded to the motor reference generator. It robustly compensates frictions in ordinary situations, and prioritizes safety against excess disturbances. An advantage of the proposed method is that it is implemented only by software, so that an application to small and cheap motor drivers is easy. 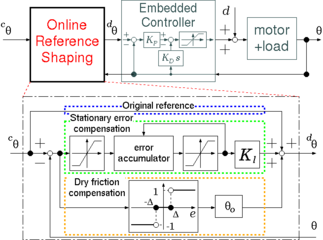 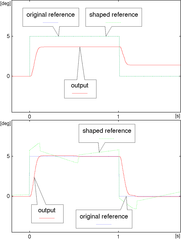 It is crucial for mobile robots to estimate the current attitude with respect to the inertial frame accurately. Rate-gyroscopes and inclinometers are often used for this purpose. The former requires integration, which seriously magnifies the error. The latter is basically for measuring static inclination, so that it has a slow respose. Both sensors show low measurement accuracy for typical motions of legged robot since the significant component of those motions in the frequency domain is out of the working ranges of each sensor.