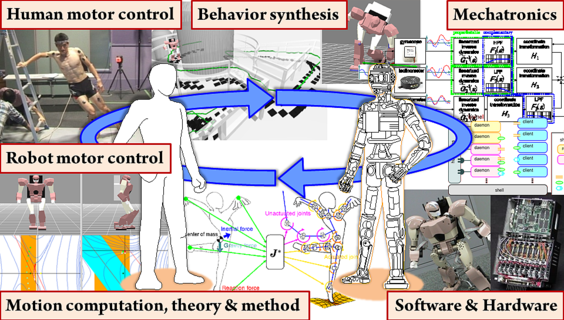 We are studying the human intelligence bidirectionally from human motion analysis and humanoid robot control. Missions are listed in the right column.

The human behavior and decision making are not always logically defined and optimized, but necessarily reasonable and robust. Our philosophy is that it is because human behaviors are composed from purposeful body articulation, namely, motor control, under the laws of physics which exist over human's will. Motor control is the basis of human intelligence.

Dynamics and control in the strongly nonlinear world

The challenge is to discuss mathematically the human motor control, which is hardly evaluated in terms of speed, power, accuracy, etc. The issues to be tackled includes nonequilibrium where the human never stays at one configuration, discontinuity accompanied with the exchanges of supporting body parts, uncertainty due to the hardness of accurate modeling, ill-posedness where a variety of behavioral strategies are possible for one task, and so forth. An extremely strongly nonlinear world is the research target.

A complementary approach to both human understand and humanoid robot development is significant in the sense of engineering. Humanoid robots are the ultimate personalized machines and expected as users' "spare bodies" which are promising man-machine interfaces in the future. It is crucial to realize motion ability and situation judgement capability at the same or higher level with humans for practical humanoid robots. This challenge doesn't only include the theoretical aspect but the practical studies of software and hardware implementations.