Please refer to this page (in Nakamura & Takano Lab's webpages, Univ. of Tokyo) about our robot mighty. 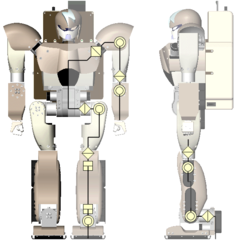 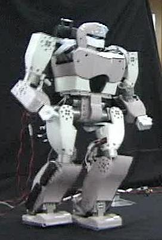 An odd facet of the humanoid robot comparing with ordinary industrial products is that a concrete use is not designated when manufactured. A developmental software construction framework which allows users to enhance the use and function during the actual operation is required.

More difficult issue is that robotic systems are open to the external world, namely, the system behaves through the interaction with external world; it is not sufficient to process fixed jobs according to a fixed procedure. Such systems have multi-term information flows including long-period flow to synthesize purposeful behaviors, short-period flow to run sensory-motor reflexes, and responsive flow to cope with extrinsic events. Though the system can be rather easily built if it has a program to manage the whole information flow, such a supervised system is less extensible.

In this study, a software framework which utilizes the plug-in architecture is proposed, where the whole system is constructed from homogeneous modules which can control the data visibility and the period of information flow. A systematic way to extend the system with multi-term flows consistently is to build the system conforming to some implementation rules. As long as developers follow those rules, they are only need to know the specifications of modules adjacent to that they are in charge of. As the result, a highly extensible system is realized.